Well after several days in Sydney I've finally found some time to make a blogpost about my experiences here. It's been almost 7 days now and I'll remain here until Friday when I hope to move on to Melbourne, either by train or plane. My plans are to see the lower part of Australia (like Melbourne and Tasmania) and then move up towards Adelaide. All this during the summer here in Oz and than move up towards the North which should by then have recovered a bit from the floods.

Anyways last week on Monday I left Heikant with my parents around 5:45 to head to Schiphol and tried to avoid the early morning traffic. We managed as much and had lots of time at the airport to say our goodbyes. Quite emotional! And then my flight got delayed for about +/- 45 minutes because of some technical difficulties but after finally boarding we did manage to arrive in Kuala Lumper in about 11 hours of flying. Which gave me a hour to do nothing but wait for the flight to Sydney. That flight also being delayed slightly, I got to Sydney airport around 20:00 local time on Tuesday. There I met a German backpacker by the name of Alexa and shared the shuttle bus trip to the city center. I finally arrived at the hostel around 23:15.

All in all getting a bit delayed worked out well because I could sleep straightaway and did. The thing I did learn about flying for 20 hours is to do a little pitstop of a few days in Kuala Lumpur next time around.

On my first real day in Sydney I started with a run through the Botanical gardens near the Opera House. Quite a view and even a bit strange with the birds and especially the bats hanging in the trees. But the run wasn't quite that long as the humidity killed me after 2 KM. After that I met Alexa for a bit of walk through the city. Although we covered most of the city, like the Opera House, City Center, Circular Quay, Chinatown and Paddy's market. The last being a big market in a building near Chinatown, quite big.

In the evening a lot of people from the hostel (Blue Parrot Backpackers) where I'm staying went out for drinks in a bar which was quite nice as well. I must say I sure know how to pick 'em....the hostel I mean. It's not to massive and the people there are very friendly. It's run by two Australian sisters whom add to the great atmosphere. The look very nice as well ;)

On the Friday I went to the Blue Mountains with Alexa on her last day in the Sydney area. It was a great trip with lots of amazing views and a nature walk in end. After the nature walk down the valley we went on this very steep train with an incline of 52 degrees to go back up the valley.

Saturday it was time for the beach. So I jumped on the ferry and headed for Manly with two Brits (Dan and Andy). A great looking beach and even went into the sea for a bit but that was quite cold. Downside of the fun in the sun was I got some bad sunburns on my back and forehead. Even with the 40 SPF sunblock. Thus was a bit under the weather the last few days.

Yesterday I finally met up Anna. A roommate from a few years back in Rotterdam. She has been living in Australia a few years now teaching English and living with an Australian bloke. She toke me to her favorite spot in Sydney, Cremorne Point which is located across the Opera House. Gives you an amazing view on the south side of Sydney. So we had a little picknick with a nice cider drink. Thanks for that Anna!

Some other things I've done have involved me getting an Australian bankaccount, Tax File Number (for working here) and a YHA (Youth Hostel Australia) card to get discounts. Oh and in seems that the time on my camera is a bit off so my photo's are still on Dutch local time. I've changed it now ;) The weather has been very good here. Even though it occasionally rains for a few minutes. 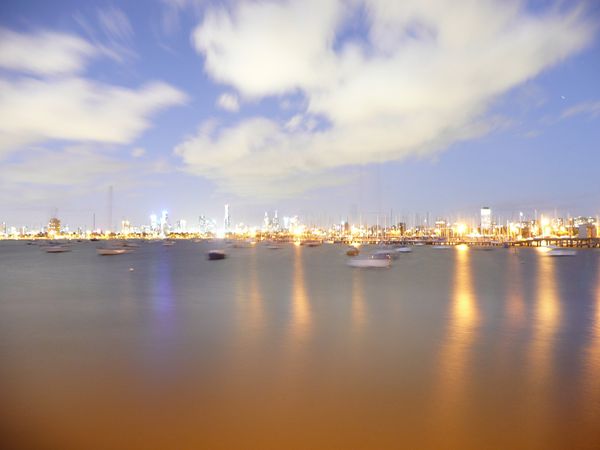 After visiting Sydney, I moved on to Melbourne. I took the night train from Sydney to Melbourne on Friday around 20:40 and arrived in Melbourne in the early morning.

After years of longing and months of planning today I will finally fly towards Sydney, Australia (don't worry I'll definitely NOT make the Sydney, Canada mistake). Preparing to travel for a long period takes some planning but that's part of the journey and the