I've always thought that if you start a diet it's something you will have to incorporate into your life for the longterm, if not forever and not just for a period until your reach your goal, that goal being a certain weight. If you however go for the shortterm you are bound for the obvious yo-yo effect. So when I started my Paleo diet, for a lack of better word (the word diet has a really negative association these days), I didn't do so lightly. I had been reading up on it for quite a while and even though my buddy René was on this diet I wasn't convinced yet.

In this blogpost I'll educate you on what Paleo is and isn't, although it's not a term that is set in stone. But it is for instance not just another low-carb (carbohydrate) diet. At least not for me but explaining it to friends I have sometimes used this term to make it easy to explain. This blogpost should be seen as the longish version of explaining my diet.

In last 10 years I've been struggling with my weight. When I was 21 I weighed about 70 kilogram (154 lbs / 11 st), a few months before my 31st birthday I had reached 96 kilogram (211 lbs / 15 st). I had enough (literally) and in July of last year I bought a bike through a "bike-to-work" project and started cycling to work every workday (through any type of weather). This is about 32 kilometre a day (20 miles), 160 K a week, 640 K every 4 weeks. I lost about 10 kilograms (22 lbs / 2 st) by doing this within 4 to 5 months time, just before I went on my WCT trip with Adam & Chrissy. But I was stuck around 83-86 kilograms for months until I saw Bert Hubert's techtalk modern food theory in March 2013. A lot of what he said were things I had read about in my research on modern nutrition (or seen in documentaries like In Search of the Perfect Human Diet). Including his view on Paleo which gave me the last push I needed to start my path on the Paleo road. Mainly due to my experience with exercise. Sure exercise will help with weight loss but in the longrun it's a half measure and you need to involve your food intake into your health. You are what you eat has never been so true as it is today.

If you walk into any supermarket you will noticed that the bulk of products are processed foods. Added sugar, added flavouring, added colouring, added this and added that. In the last 50 odd years we have never had these amount of choices in products that are processed. And even though the food industry let us to believe that fat is the main source of us getting fatter that just isn't true. Light products are for instance a great example, have you actually lost weight by buying this stuff? Of course not, and why? Well while removing most of the fat from these products they lost their flavour (yes fat equals flavour in most foods) and thus they added more sugar to make these cardboard tasting products palpable. However unused sugar that you eat is converted into fat inside the body. Much like any form of energy we consume it get either excreted or converted. Our bodies are design to store surplus food to survive extremes like winters when there would be a shortage of food. Of course these days shortage of food in winter is non-existent for most of us. So consuming to much can lead to excess weight. For instance it's amazing how much sugar we currently consume on average. Some are even calling it the sugar pandemic and see the rise in diabetes type 2 as a direct result. If you really want to know more about how bad sugar is you should read Pure, White and Deadly by John Yudkin or if your bound for time watch:

But back to Paleo, let's get into the basics of it. This is what Wikipedia has to say on the matter:

The paleolithic diet (abbreviated paleo diet or paleodiet), also popularly referred to as the caveman diet, Stone Age diet and hunter-gatherer diet, is a modern nutritional plan based on the presumed ancient diet of wild plants and animals that various hominid species habitually consumed during the Paleolithic era—a period of about 2.5 million years which ended around 10,000 years ago with the development of agriculture and grain-based diets. In common usage, the term "paleolithic diet" can also refer to actual ancestral human diets, insofar as these can be reconstructed.

Sound like an ordeal right but you might want to read more about it first. Here is a nice little overview with some Q/A about what Paleo entails. If you are more of a visual person you might like this cheatsheet: 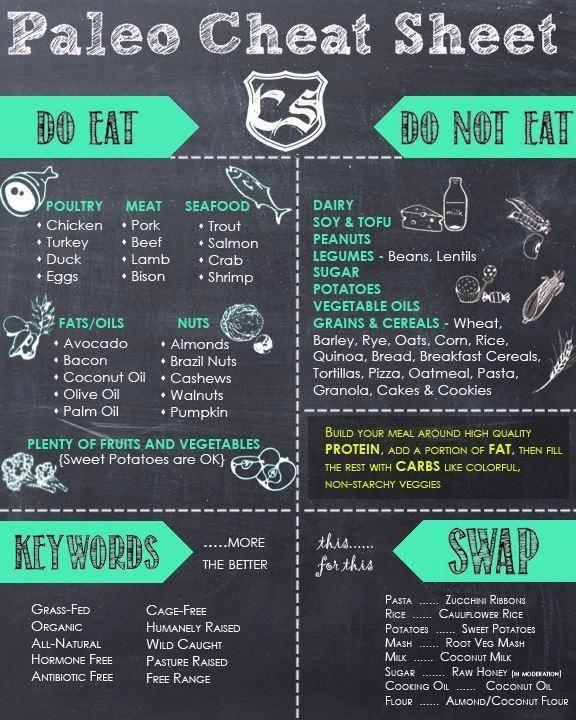 Paleo for me personally means I don't eat pasta, rice, potatoes, milk (or any milk products for that matter), flour, like listed above but also no soft and fruit drinks. Why, because drinks like these are high in (added) sugar content. Yes even fruit drinks are. A prime example is orange juice. It sounds health right? But think again. Taking all the fibre out (pulp just doesn't count) and ending up with only juice gives you a nice sugary drink which indeed has some vitamins in it. I personally opt for fruit in it's original form but then in modest amounts. Fruit is healthy but still hold a lot of sugar, so I go for vegetables instead.

So with the above in mind I've been on this diet since March. In the beginning it can be quite invasive but you do start to notice some big effects in the first week already. Not eating/drinking any dairy products has certainly decrease the bloatiness that was common for me. The ability to taste subtle things in food has also increase vastly. Especially sugar and salty tastes in foods are way easier to detect. Maybe because I avoid these in my diet now. One of the other positive things about this diet thus far has to be the increase in energy throughout the day. The after dinner dip for instance is gone!

However some things are still hard on me, like lunch at work. Although we have a good cafeteria, it's not that great paleo-wise. We do have salad and such but diversity wise it is pore. So I am still struggling a bit there. Preparing evening meals has been quite good in comparison. There are plenty of sites on the web with delicious recipes. The Paleo Iron Chef challenge cookbook has been one of my favourites (especially check out page 6 and 8).

So lets talk food vices. Most of my friends know that I would put ketchup onto almost anything, ketchup on ketchup I dare say. But the ketchup I used to use is produced with high fructose corn syrup (HFCS). This is sugar made from corn and has replaced 'regular sugar' in many products in the last 10-15 years, especially softdrinks. The difference between regular sugar and HFCS amongst others is the sweetness. HFCS is much sweeter per portion and although you would think that they would decrease the amount used in products to get the same sweetness the food companies didn't. They increased it! In some recent documentaries there have been talk about direct link in introduction of HFCS into food and the rise of over-weight people and with it related deceases.

Anyway I've since ditched ketchup and I do miss it but I'm currently on a mission to make my own health version. My other main food vice is chocolate. I mean I love that stuff. So I have opted to go for dark chocolate instead and this is also where the 80/20 rule comes into play. Most diets are quite strict, but some allow for "time off" and Paleo falls into the latter of the two. 20 procent of the time that is, if you want. Certainly makes it more doable.

So in the last six months I've lost another 8 to 10 kilograms and I'm currently at 77 kilograms (169 lbs / 12 st) and feeling great about it! In the end it's not so much about the weight loss although that does help but it's very much more about how you feel about it. Sure there are diets out there that get you the same result in weight loss but can you stick with it? Do you feel great while on it? Of course 6 months isn't very long yet and I've still got ways to go but I currently feel a lot healthier. I'll try a do a follow up next year to see where I stand around that time.