A few years ago while travelling through Australia I started hearing more and more about something called 'couchsurfing'. The first time I heard about this idea it made me snicker and I didn't really look into it until I got back home. In retrospect I would probably have used couchsurfing in Australia if I had joined the website back then. In this post I'll be getting into my experiences so far as a couchhost & couchsurfer. But before I proceed to the good stuff let me educate you in Couchsurfing 101.

Couchsurfing is build on the idea of sharing. As a couchhost you share your life for a few days with a couchsurfer. You have control over your involvement. This can range from providing a place to sleep & swapping travel stories to getting more involved and showing them around your neck of the woods, sharing a meal & drink, etc. Although some might think couchsurfing is just a great way to achieve free accommodation while travelling on a budget these free loaders are wrong. Sure it's a great perk but couchsurfing for me is getting to know somebody from a different background with different interests. It's great way to hear about old & new things in our world you haven't heard about before. I for instance recently discovered Dawes - When My Time Comes thanks to Kate. Besides getting jealous about all those great travel stories.

You might get freaked out about the idea that you invite somebody you don't know at all into your home but it's not like that. You have several tools at your disposal before they actually cross the threshold of your sanctuary. To start there is the couchsurfing website where you can look at there profile and see what they are like including references left by other couchsurfers/hosts, photos and badges (vouched for, location verified, etc). As a couchsurfer you stand a better chance to get a couch with a proper filled out profile, I wouldn't host anyone with just the basics in there. Besides the website you can always use Google search to see what you can find out about somebody. These days people share a lot ;) Another indication is their couchrequest. This is a request from them to you as a couchhoster for a period of time to use your couch. Couch can range from an actual couch here to a mat on the floor or even a kingsized bed. A good request has lots of detail and doesn't look copy/paste for mass distribution. It contains details about what you might have in common with the couchsurfer and it reads as if they actually read your profile before sending you the request. All of this helps you with separating the good from the bad.

My first couchsurfing experience was back in September after I finished hiking the West Coast Trail in Victoria, BC. Going back down to the States I stayed in Seattle, WA for 2 nights with Eric. He welcomed me in his spacious apartment where I had a room to myself and a double bed. I wasn't expecting this sort of accommodation but then I had no real experience with couchsurfing until then and Americans seem to have bigger houses/apartments then we do in Europe. We shared stories about travelling and working in IT but also couchsurfing and especially meditation which he did everyday. He showed me his favourite places on 32nd street and enjoyed some great food and especially nice IPA (India Pale Ale) in this nice neighborhood. My second day I used to walk around the city centre and see the sights (Space Needle, Pike Place Market, Underground Experience, etc).

Before leaving for home and after Seattle I had one other place I was couchsurfing. New York, New York or at least I was staying really close to NYC, in Cranford, NJ. Being bridge and tunnel for several days wasn't all that bad it only took me 1 hour to reach NYC from Danno's place. And what a nice place it was. He had an nice house in suburbia where I had also room to myself this time an even larger double bed with an enormous television. Danno was even so friendly as to pick me up and drop me off at Newark Airport...this is when I fell in love with Couchsurfing. During my stay at Cranford I had 6 days packed with NYC sights, I eventually had to stay in for one day as my feet were getting a bit sore from all the walking. NYC was one of the highlights of my trip and I was thankful for the tips that Dan gave me like the Circle Line and seeing Times Square during the day & night. Although I did try to avoid Times Sq. after seeing it as it's the most touristy part of NYC. I much more preferred the parks and Greenwich Village which reminded me of home.

My most recent couchsurfing experience was London back during the holiday season, just after Christmas. Spending New Years Eve there was a great idea. I got to meet Bernadet again and she was so friendly to let me crash on her inflatable bed during my 7 days of London'esk sight seeing even though she was ill during the last days of my visit. She did however show me around the touristy bits of London like the London Eye, Tower Bridge, Big Ben and more. I also got to see Catherine again whom I met in Melbourne a few years ago while I was travelling Australia. London is one of my favourite cities and on my 'I could life there'-list amongst New York and Melbourne.

Recently I started hosting myself, sort of paying it forward. I've only hosted two girls so far over the last month for a few days at a time. Both times it was a good experience. Funny enough both times the girls were American but quite different in background. Kate was travelling through Europe by herself and has been for a couple of years where Jackie has been living in France for years and before that travelled all over the world for three years. Three years....damn I'd liked to do that ;) Couchhosting, the other side of couchsurfing, is quite fun and you meet different people. It's always fun to hear about their life and experiences.

Back to couchsurfing. Couchsurfing has it's history. In 2011 Couchsurfing changes from a non-profit organisation to a for-profit one. In 2012 they change part of their layout of the website and Terms of Use

4.3 Member Content License. If you post Member Content to our Services, you hereby grant us a perpetual, worldwide, irrevocable, non-exclusive, royalty-free and fully sublicensable license to use, reproduce, display, perform, adapt, modify, create derivative works from, distribute, have distributed and promote such Member Content in any form, in all media now known or hereinafter created and for any purpose, including without limitation the right to use your name, likeness, voice or identity.

All of this was met with a lot of protest from the members of the site. Although the website needed an overhaul to make it more snappy it hasn't become that at all. It looks worse and navigation has not become better or faster. All in all this has cost Couchsurfing members that have either left and subscribed to BeWelcome with the same core believes those that started up Couchsurfing. I still use Couchsurfing and haven't started using BeWelcome but that might change soon. They idea that is couchsurfing has existed long before couchsurfing.org or even BeWelcome and it will out live it.

Passwords, it's near impossible to have never used those jumble of characters these days. I've posted about the use and management of passwords before. But these days passwords just aren't enough. Especially when people tend to use very simple passwords and using them on 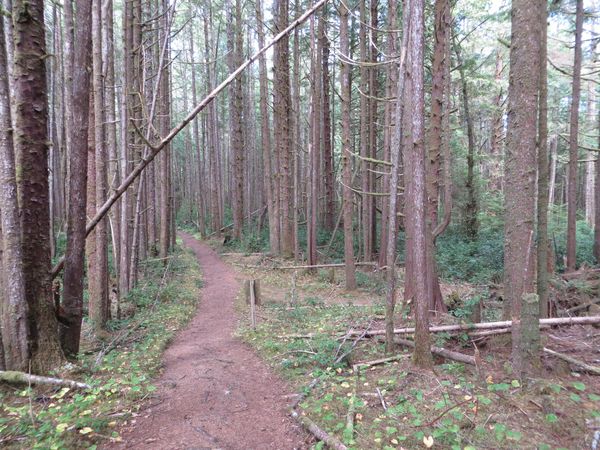 Finally blogging about the West Coast Trail (henceforth called WCT or WeeeeCT as I said one day) that I hiked back in mid September with two friends. Like I mention